So let’s talk retirement. There are many of us “approaching a certain age,” if you will, and with the recession in 2008, among other things, our savings is not where we would like it to be. I recently sat down with Devin Peterson on Brighter Retirement Radio to talk about how ADUs can supplement your retirement. You can see his website here. I’m not one to make recommendations that I am not willing to follow. I used my retirement savings to get my own ADU.  In the city of Bountiful, UT, a studio apartment with 500-600 square feet, rents for roughly $1,000 a month.

And I do not have a stranger in my house. 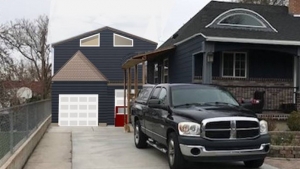 Above, you can see a completed ADU apartment over a garage, similar to the one I built.

So the apartment that sits over my garage is now supplementing my current income. It’s helping disburse other expenses for me.

An ADU can be an apartment like this. It can be attached or detached to your current home. It can be in your backyard, on a smaller lot adjacent to your home that you also own.

What is your goal with your ADU?

Let’s be honest- the building is not your end result. While having it completed is going to give you a great sense of accomplishment, it’s not the end-all, be-all. It’s how you leverage it.

This is an investment, not an expense. Unlike a car, that you’re going to trade back in in a few years, this ADU will be with you for the next 15 to 30 years. Hopefully, both the ADU-and its income-will be something you can pass down to your children.  So it is important to plan towards a specific goal. How do you want to utilize this ADU? Rental income? Assisted living for your aging parents? Separate, independent living for struggling college grad?

A friend of mine is an excellent example of how an ADU can be leveraged over time. Their grandparents were getting to the point where they could no longer care for themselves. As a family, they came together, and decided, rather than placing them into a nursing home, they sold their grandparents’ home, and financed an apartment. The apartment was attached to my friend’s house. His parents then took care of his grandparents for about eight years. They were able to cut the expenses of a nursing home and nurse completely out of the picture. As life goes, his grandparents passed on, but their apartment remained. His youngest daughter got married, but couldn’t yet afford a house.  She moved into the apartment, paid rent. They took her rent money, and put it into a savings account.

Then a deal was struck.

They told their daughter and new son-in-law, if you save money for your house, we will match it. When his daughter was ready two years later, they were able to double her down payment- not out of pocket, but from her rental payments.

Since family no longer needed the apartment, my friend elected to rent the apartment out. They took the rent, and added it to their retirement savings for fifteen years. They picked up another apartment. Wash, rinse repeat.

They then realized they didn’t really need their big house anymore. So they moved into the apartment, and started renting out the house for quite a bit more than they were able to rent out the apartment.

Now they are in their mid-80’s. A family member is now living in their main house and acting as their caregiver. When they pass away, their properties will go to their family- along with the equity that’s been built up.  They’re able to leave a legacy for their children- all because of an ADU they built for their grandparents 30 years ago.

ADUs are not just a single-purpose build. They are capable of dynamic change in order to support your family’s goals and needs.

Have more questions about the ADU build process? Jump over to our FAQs here.